Neva Small is an American theatrical, film, and television actress and singer. She made her singing debut at the age of 10 with the New York City Opera as Beverly Sills’ daughter. She made her Broadway debut the following year in the Jule Styne musical Something More playing Barbara Cook’s daughter. She has numerous acting credits on and Off-Broadway. She is best known for her portrayal of Chava, Tevye’s third daughter, in the 1971 film Fiddler on the Roof. Her signature role remains a classic. Neva has distinguished herself as a singer and actress in theaters and concert halls across America, on film, and on television.

Returning to the spotlight after raising a family, Neva co-starred with Michael Feinstein in a celebration of the songs of Bob Merrill, having starred in two musicals by Mr. Merrill, in the Michael Feinstein: Now & Then series at Carnegie Hall,.

Neva released her first solo CD, Neva Small: My Place in the World, which went on to become a bestseller. As a guest artist, with the Walla Walla Symphony, Neva co-starred in the Rodgers and Hart program written by Ron Spivak.

Her cabaret show, Not Quite An Ingenue, was so successful it transferred Off-Broadway to The Actors Temple theater. The original cast recording is available on CD.

For the Actors Temple, Neva recently narrated The Past is Prologue – a YouTube special about Ed Sullivan.

Neva has appeared on television in Law & Order, Law & Order: Criminal Intent, and the TV movie The Hijacking of the Achille Lauro.

Recently, Neva appeared in the documentary Fiddler: A Miracle of Miracles, which can be found on Amazon Prime. She is also featured on the recent Yiddish Fiddler on the Roof album, singing “To Marry for Love”, a song that was later replaced with “Matchmaker” in the original score.

Neva is an accomplished writer, producer, teacher, and performer of children’s educational programs. She lives in New York City with her popular dog Ella.

” . . . Small’s voice is just as big, powerful, and distinctive as ever, and it’s nice to be reacquainted with it!” 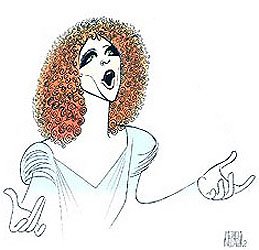 Ella, Irish Setter (5 y/o), Central Park, New York, NY • “She only eats rabbit. She had terrible skin problems and she’s been gluten intolerant for years; she was a bag of bones until we figured that out.” pic.twitter.com/aA1DnXDNjo